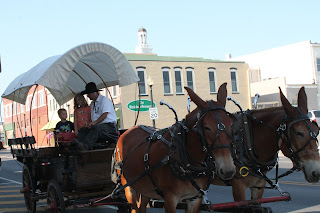 In the historical town of Independence, MO located just outside of Kansas City, you can make history come to life and enjoy history as a family. Independence has a unique Mormon history, many of the frontier settlers passed through here, and Independence was home to our 33rd President Harry S Truman "The Buck Stops Here."

Discovering the Life of our 33rd President

The Harry S Truman Library and Museum brings history down to a child’s level. A majority of the Truman Library and Museum is aimed toward the older visitors and bringing the history and events surrounding the Truman Presidency. However, tucked away on the lower level of the museum is the “Harry S. Truman: His Live and Times” exhibit. This area is perfectly designed to enlighten the brains of those who are not old enough to remember Truman’s famous line “Buck Stops Here”. There is four interactive stations giving children the opportunity to learn what it was like when Truman was a Postmaster. Children can make their own campaign buttons, unlock the secrets to Harry Truman’s jobs, and dress up and pretend to be President Truman.  Continue to read more

Posted by The Missouri Mom